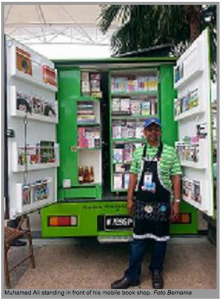 KUALA LUMPUR (Bernama) — The sight of the much awaited three coloured – orange, yellow and green – van with books depicted in its livery finally appeared on the street much to the delight of this writer.

The driver then parked the van at the roadside and opened the rear doors where the sight of rows after rows of neatly arranged books greeted the eyes.

The van is a mobile bookshop with all the books within are for sale to the public.

This mobile bookshop – Mobile Book Cafe – is believed to be the first of its kind owned and operated by two friends, Muhamad Ali in his 50s and Muhammad Azam Nor Anwar in his 30s.

A NOVEL AND NOBLE IDEA

The mobile bookshop that was in planning for over a year and started operations three months ago drew inspiration from the mobile bookshops owned by renowned publisher in the United States, Penguin Books.

Elaborating further on the novel idea, Muhammad Azam says as soon as the idea cropped up, he shared it with Muhamad who by coincidence was contemplating on the same idea.

The duo have known each other for the last six years when both were working in the information technology section at a private company.

“After working for 30 years, I decided to move on and venture into mobile business. I pondered over the many things that I could sell, and finally decided on books as they were always in demand and the fact that both of us like writing”, Muhammad Azam said to Bernama.

“Initially some suggested to us to consider a truck or a bus, but we had to take into consideration the logistic constraints especially looking at the fact we will be plying our trade on the parking lots”.

However, the problem with a van is its limited space and therefore modifications had to be made so that space is optimised to the maximum to suit the business model.

“The approval process to modify the van took about four months and based on the Road Transport Department’s (JPJ) record, we are the first mobile bookshop approved by JPJ in the country”, says Muhammad Azam.

The modification allowed 1,200 titles to be displayed on the racks and another 5,000 stored in the van.

“We spent RM150,000 for the mobile bookshop with half of the amount coming from the bank”, he adds.

Also they had to clearly differentiate the mobile bookstore van from mobile public libraries to ensure the success of their business model.

WHERE THE BOOKS ORIGINATE

The books are supplied by publishers with some bought and resold by the duo.

“Our advantage is that my friend Muhamad who had come up with five books knew the publishers. This enabled us to receive book consignments from them,” he says adding that the mobile bookstore gives priority for titles from local authors.

The Malay and English titles are carefully selected with priority for books with constructive content that conforms with the societal norms and helps in mastering the languages.

“The reading material we sell, including comics, use the correct grammar. This indirectly helps to improve the command in the languages among students”, he said.

SOCIAL SERVICE THROUGH SELLING OF BOOKS

The mobile bookstore’s target market is the schools, higher education institutions and sales carnivals throughout the Klang Valley.

“We realise that there are many out there who are eager to read but do not have the time or the opportunity to get to a bookshop, so in helping to fulfill their needs we get to them by being present at places where people congregate.

“The feedback that we received on this concept in so far has been positive”, he says.

Like in the bookshops, many just stop to glance through the books on display and enjoy the free coffee provided.

They are not obligated to buy the books and this is partly a social service to encourage people to read.

To get closer with students and undergraduates the mobile bookshop not only appears at the schools and campuses to sell books but also offers free programmes.

“The programmes depend on our target audience. When we are at the primary schools, we hold drawing and writing workshops, while at secondary schools we have workshops on writing and poem based on the interest shown by the school”, he points out adding that they invite experts to handle the programmes.

The mobile bookshop has visited several schools and higher education institutions in the northern and southern part of the country.

However, going place to place to sell books has its own set of challenges, including rain, as water can easily destroy the books.

Muhammad Azam says when the weather takes the turn for the worst, they get ready to close their mobile bookshop and wait in the van before the weather permits reopening of the mobile book shop.

Another big headache is convincing the schools with their programmes and the mobile bookshop.

“Thus we have to be creative in planning out suitable programmes each time we make our rounds. There is no sales if the van does not move”, he says adding that he plans to expand the mobile bookshop business.

The business expansion plans include the setting up of partnerships in several states at the north and south of the Peninsula, and Sabah and Sarawak.

“Our goal is to show to the people that ‘books are man’s best friend’ and to help the nation achieve the developed nation status by 2020 by encouraging its citizens to read more.

Posted in INFO, PROMOSI | No Comments »

This site uses Akismet to reduce spam. Learn how your comment data is processed.